A small fishing port with quaint cottages and English trees, Dover was once a convict station. Today it is an important centre for both apple orchards and the salmon, abalone and cray fishing industries.

Where is it?: 83 km south west of Hobart, in the Huon Valley. Dover lies beside the waters of Esperance Bay and the D'Entrecasteaux Channel, with the imposing figure of Adamson's Peak in the background.

Dover enjoys a moderate climate, sheltered from the prevailing cold winds by Bruny Island, and is frequented by tourists keen to experience the idyllic coastal scenery or those eager to explore the deep wilderness further south.

Casey's Living Steam Museum combines an excellent display of old steam engines with a small display on the local apple industry, a display connected with the timber industry and particularly the huon pine, and a section on the history of Dover with an old bark hut.

A trip out to three islands in the bay - named Faith, Hope and Charity - is recommended. The three islands were named perhaps to inspire the convicts held at the original probation station. The smallest of the three islands in Esperance Bay, Faith Island, was known in earlier times as Dead Island. When the Dover Convict Probation Station was in use between late 1844 and 1848, numerous convicts were buried here, hence its early name.

The Hope Island Probation Station was a colonial convict outstation of the Dover Probation Station. In 1847 there were 18 convicts on the island under an assistant superintendent; the men being primarily engaged in growing vegetables. Around 1848, shortly after abandonment of the probation station, the island was leased for private farming. By 1851 some of the buildings were already reported as falling in ruins. The Assistant Superintendent's Quarters is the most prominent of the ruins on the island. It was a basic Georgian style cottage built from local field stone bonded with the rich red clay of the island. It was originally whitewashed and had a timber shingled roof. In 2015, Tasmanian Parks and Wildlife Service rangers, field officers and heritage staff worked with a local stonemason to stabilise the building by rebuilding the collapsed western wall. 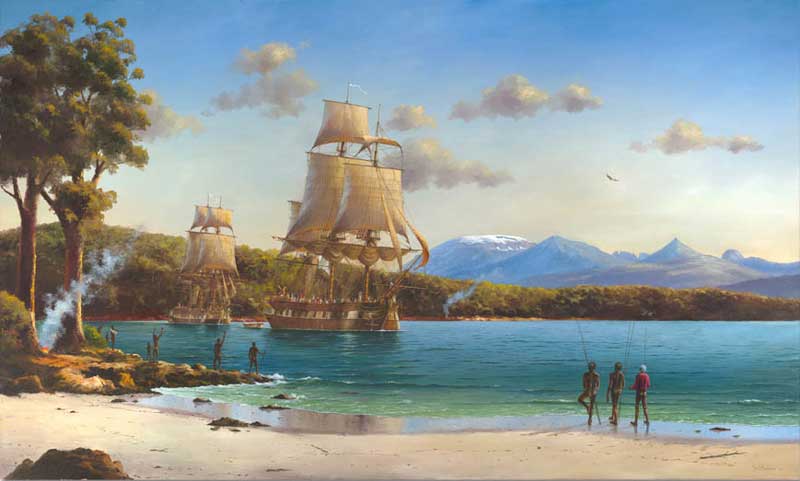 The town's locality was named Port Esperance by the French explorer, Admiral Bruni D'Entrecasteaux, who charted the area in 1792. It was named after one of his ships, which is also remembered in the name of the town of Esperance in Western Australia. Bruni D'Entrecasteaux and his expedition had visited the Western Australian coast and the locality where the town of Esperance now stands a short while before visiting the Huon region of Tasmania.

Dover was originally established as a convict probation station. Here, inmates transitioned to the status of a pass-holder, eligible to be assigned to employers and earn wages while still serving their time in the penal system. There is now little evidence of the town's penal past. All that remains is the well preserved (and privately owned) Commandant's Office which is located next to the Caravan Park on Beach Road.

Dover can legitimately claim to be the southern most town of significance in Australia. There are villages further south but Dover is the last place where you can buy petrol and supplies. Some of the villages on Bruny Island are further south and, inevitably, there is a long standing argument between the hotel in Alonnah on Bruny Island and the Dover Hotel as to which is the most southern hotel in Australia.

The road south from Geeveston to Dover is the Huon Highway. It travels mainly inland until it reaches Surges Bay where it touches the coast and then turns inland again. To travel closer to the river, take Scotts Road from Geevston; it passes through the settlement of Cairns Bay before joining Huon Highway. To continue following the river, at Surges Bay you can take Esperance Coast Road which becomes Kent Beach Road before meeting up with Huon Highway at Dover.

Cairns Bay is a small bay and settlement 4 km south of Geeveston on Scotts Road. The southern end of the settlement is close to the Huon Highway. Cairns Bay is in an orchard-growing district, but the settlement was once used as a timber port. Ferries were the means of getting timber and produce out of the area and Cairns Bay was the main loading port in the area because of its position on the Huon River.

Waterloo is a small community on the Huon Highway 4 km south of Cairns Bay and 8 km south of Geeveston. It is an orchard growing area and has good access to the popular Waterloo Bay. Originally known as Adelaide but was changed to the same name as the bay.

Surges Bay is a small township on the Huon Highway 10 km south of Geeveston. It is situated in a small bay on the Huon River of the same name. Once an important port for the ferries it was still being used well into the 1930's. Small boats and barges also took the apples to Cygnet for processing. It is at Surges Bay that you can take Esperance Coast Road which becomes Kent Beach Road before meeting up with Huon Highway at Dover.

The settlement of Brooks Bay is 5 km south of Surges Bay on the Esperance Coast Road on a pleasant small bay. It is a quite place with a good frontage onto the Huon River and overlooks the mouth of Port Cygnet.

Police Point is 6 km east of the Huon Highway at Glendevie on the shores of the Huon River. It is situated at the junction of the Esperance Coast and Police Point Roads. The point from which the name is taken is about 1.5 Km. further south on the Huon River. The small farming and orchard growing district community of Glendevie is on the Huon Road, 12 km south of Geeveston. It started as a wood-milling district; the wood-mill was situated close to the township. It was formerly known as Snake Plains - the name was changed in 1923.

Barretts and Surveyors Bays are two small east-facing embayments located on the southern side of the entrance to the Huon River estuary. Barretts Bay has a 200 metre long narrow beach, which faces east out of the estuary. The Esperance Coast Road clips the southern end of the beach, with a small car park and reserve behind the beach.

Surveyors Bay is 10 km east of Dover on the Esperance Coast Road. It was once a busy port for the timber trade that once thrived in the area. Surveyors Bay is situated at the mouth of the Huon River and this made it easy to access. The bay lies 3 km to the southeast and 1.5 km north of Huon Point, the entrance to the Huon estuary, with Surveyors Point forming the northern boundary. The curving 600 metre wide bay has a 350 metre long beach which receives waves averaging up to 0.5 metres. The beach is backed by a row of holiday cottages. Adjoining Surveyors Bay is Hideaway Bay, the home of HUON Aquaculture.

The forty metre high Huon Point borders the eastern end of Roaring Bay, which has a 1.4 km long south-facing beach, which receives south swell averaging about 1 metre. The bay has a row of beachfront houses, with a small creek crossing towards the western end and another 200 metres of the more sheltered beach extending west of the creek. Little Roaring Bay lies 500 metres to the south and is a more sheltered east-facing beach located at the mouth of a valley. Kubes Creek drains the valley and crosses the centre of the beach.

Closer to Dover, Kent Beach Road runs behind the 800 metre long Kents Beach on Port Esperance, which is good for swimming, having a low swell, as well as some wind waves. The small Glenbervie Rivulet and wetland are located at its eastern end, with Bells Lagoon at its western end.

© All rights reserved | Design by  W3Layouts