The Heritage Highway follows the original inland road from Hobart to Launceston that was pioneered by Tasmania's early European settlers and built by convict road gangs in the 1810s. Aptly named, the Highway passes through some of the most complete and well preserved Georgian era villages in the world today in which the finest examples of colonial architecture and convict craftsmanship in Australia can be seen and appreciated.

When driving around Tasmania, it is difficult for the history buff or those who appreciate the finer points of craftsmanship of yesteryear to choose down which road to travel, as these is so much to see no matter which direction you turn. Such is the case when travelling from north to south - the east coast route has scenic coastal vistas; the west coast passes through World Heritage mountain wilderness areas; the road through Tasmania's heart - the Heritage Highway - takes in some of Australia's finest Georgian era colonial towns and villages.

The Midlands is farming country, green and gold hillscapes dotted with sheep famous for their superfine wool, cattle and poppy fields, hawthorn hedges and winding streams, all ringed by distant mountain ranges, snowcapped in winter. The area is dotted with historic villages; metal handcrafted silhouette sculptures along the roadside depict the bushrangers, convicts and colonial settlers for whose colourful past the highway is named. Location: The Tasmanian Midlands, between Hobart and Launceston.

Return Journey: Follow either the east coast route via Bicheno, or through the Central Highlands via Bothwell and Miena. As an alternative, you can return via Heritage Highway, but take the road via Colebrook, Campania and the historic Georgian village of Richmond between Hobart and Oatlands.

Just about all the towns on Midlands Highway have excellent bakeries, toilets, and many have parks and reserves with picnic facilities.

Head south from Launceston via the Midlands Highway.

If that is what you would like to do, take the left exit at Breadalbane towards Launceston Airport. Drive past the Airport and you'll soon be in Evandale. Just before you reach Evandale, there is a road to your right signposted to Perth. After visiting Evandale, return to this corner and head towards Perth.

If you are visiting the Launceston area but don't want to spend all your time in the city centre, Evandale offers accommodation with that lovely village atmosphere. It's a classified historic town, a storehouse of superb Georgian heritage buildings which remain in largely original condition. It is also an agricultural and administrative centre located on a knoll rising from highly modified plains.

Unless you are happy wandering around, taking in the old worlde atmosphere of the place, there isn't a lot to do in Evandale, unless you are there on a Sunday, when the well patronised Evandale Markets are on. Call on another day and you'll find plenty of cafes, gifts shops and galleries open, and a fascinating general store to browse through.

When you leave Evandale, had back as though you were heading towards Launceston Airport, but turn left when you reach the turn-off to Perth.

Perth is a quiet historic village which has largely been by-passed by the tourism that has turned many of Tasmania's other historic villages into centres full of gift shoppes and antiques retailers. There are a number of buildings of achitectural interest including Eskleigh, the Baptist Tabernacle, and St Andrews Church. A National Trust brochure, available around the town, lists no fewer than 41 building heritage buildings. These range from hotels, to private homes, to old shops. It is an invitation to wander around the town and explore its heritage.

Longford is the biggest of the three towns, an agricultural and administrative centre located at the junction of the South Esk and Macqarie Rivers. Longford Racecourse is the oldest continuously operating racecourse in Australia. The town is home to many horse studs and training facilities, and the Longford races are held annually on New Year's Day, with thoroughbred horse racing and the Elders Webster Longford Cup.

Longford's story is also intertwined in the history of motor racing in Australia. Stop off for refreshments at the Country Club Hotel and learn about the days when the likes of Alec Mildren, Bib Stillwell, Frank Matich, Bob Jane, Jack Brabham, John Surtees, Bruce McLaren, Lex Davison, Leo Geoghegan and Allan Moffat alll raced past the hotel's front door.

Leave Longford via Wellington Street and you'll soon like you are driving down an English country lane with high hedges on either side. In the middle of it all there is an lane off to the left which takes you to Brickendon Historic Farm and Convict Village. One of Tasmania's World Heritage Convict Sites, the Village was built in 1824, and going inside is like stepping back 150 years in time. There's a convict-built Gothic chapel, Dutch barns, chicken house, blacksmith shop and tool shed and stay in historic farm cottages.

When you are ready to leave, go back to Wellington Street, but instead of turning left, go straight over the road into the entrance on the other side. After a short drive, you'll ready the Brickendon homestead and gardens. You can't go inside but visitors are free to wander around the grounds.

Return to Wellington Street, turn right, and after crossing the river you'll pass Wolmer Estate on your left. Another 19th century estate, Woolmers is quite different to Brickendon and is also worth a visit. Guide tours of the house and grounds are availble; Woolmers is also home to one of Australia's finest rose gardens.

If you don't have time to visit both Brickendon and Woolmers Estates, we recommended you see at last one and come back some other time to see the other as they are both well worth the entry fee.

Continue on the road out of Longford. Upon reaching Midlands Highway, turn right and continue on to Campbell Town.

Cleveland might have been one of those "don't blink or you'll miss it" places were it not for St Andrews Inn, which has been a popular stopping place since stage coaches stopped to change horses here.

Once an important railway junction, Conara is better known for the disappearing house, an optical illusion that has captured the imagination of travellers on the Midlands Highway for decades.

Once one of the early coaching stops between Launceston and Hobart, Campbell Town is nestled on the banks of the Elizabeth River on the main road between Hobart and Launceston. The town has an impressive collection of colonial buildings from the Georgian era. Campbell Town has a number of great eating placeas, and a great roadside park for kids to run around and burn up some energy. 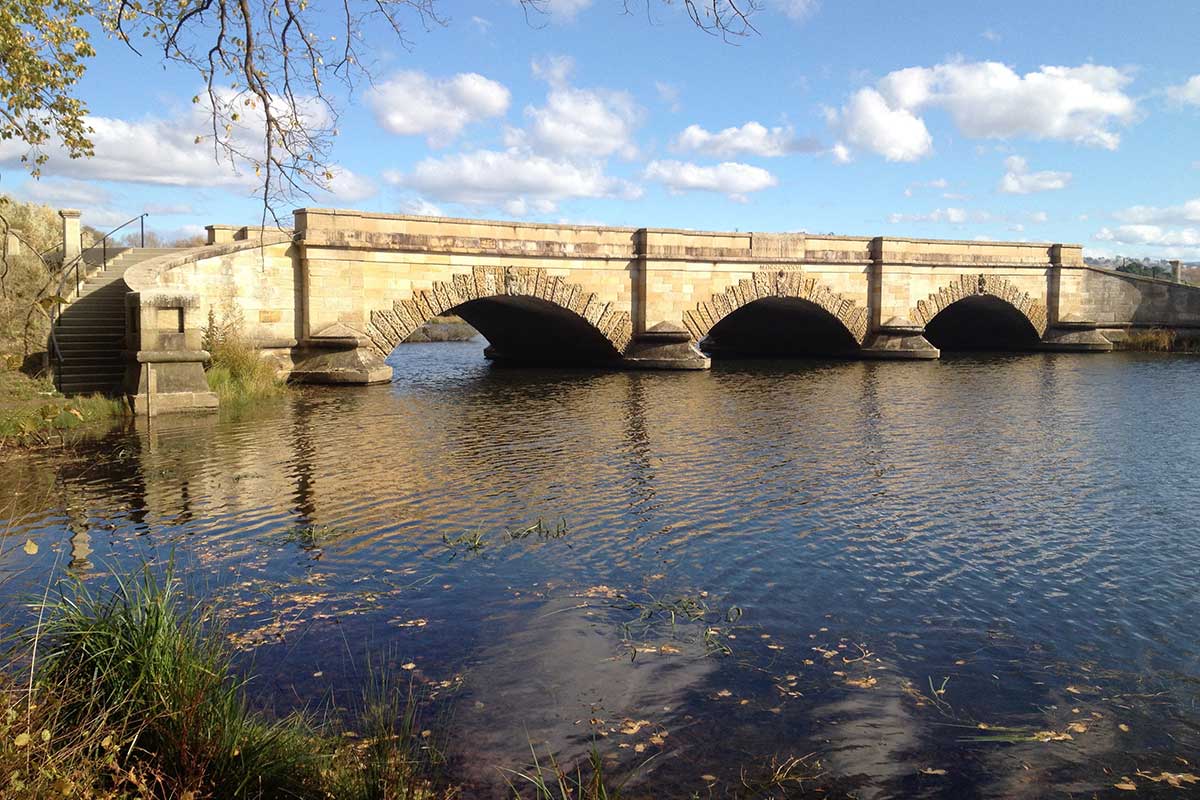 Ross was established in 1812 when a garrison of soldiers was established at the ford of the Macquarie River. Its convict built bridge is one of the finest examples of convict construction work in the world, and is the most photographed bridge in Tasmania. Thw town has an interesting colonial cemetery, the unique historic female factory, a 42 degrees south historic display, as well as an iconic pub and two excellent bakeries.

The town of Tunbridge came into existence in 1809 and quickly developed into an important coaching stop between Hobart and Launceston. Tunbridge convict bridge, built in 1848, is the oldest timber single span bridge in Australia. There's not a lot here but worth a stop if you're looking to photograph some interesting Georgian architecture without modern day vehicles spoiling the view.

Oatlands, known for its iconic windmill, is said to have the largest collection of pre-1837 buildings in Australia. 87 such buildings are located in the main street while a total of 138 sandstone buildings are found within the town boundary. Oatlands' Topiaries Trail (shaped hedges) continue the tradition of the original topiaries located on the Heritage Highway north of Oatlands, first created by the late Jack Cashion.

Oatlands offers something a little different for foodies. There is a popular pancake/crepes restaurant and a cafe decorated with movie making memorabilia that is a shrine to Tasmanian born Hollywood heart throb, Errol Flynn.

Founded in 1816, the tiny historical village of Jericho is one of the oldest townships in Australia. Like its better known neighbour, Oatlands, the main road of Jericho contains some fine examples of early colonial sandstone architecture, and constructions including examples of convict cut culverts, bridges and walls, many of which date from the 1830s. A mud wall, a relic from the convict probation station, is appropriately known as the Wall of Jericho.

A small and charming Georgian colonial village which is registered as a classified historic town. The district was first settled by Europeans in 1814 and was known as Green Ponds - a name which is still retained as the local municipality. The town is full of quaint Georgian cottages, shops and farm buildings. The Heritage Highway bypasses Kempton, however it is worth stopping by to explore.

In the days of the horse and buggy, Bagdad was an important rest area and horse-changing place for those continuing their journey up Constitution Hill. åChauncy Vale Wildlife Sanctuary is one of the oldest private conservation areas in Tasmania. Chauncy Vale is located 40 km north of Hobart and 4 km east of the township of Bagdad. It is the top end of a narrow valley running east-west between the Midland Highway and the Coal River Valley.

Off the main drag these days, Pontville dates from 1830 and was one of the garrison towns on the highway between Hobart and Launceston. One of the best-known historic buildings is the St.Marks church, designed by James Blackburn and dates back to 1840. The town was originally named Brighton by Governor Lachlan Macquarie but was later changed to Pontville.

© All rights reserved | Design by  W3Layouts